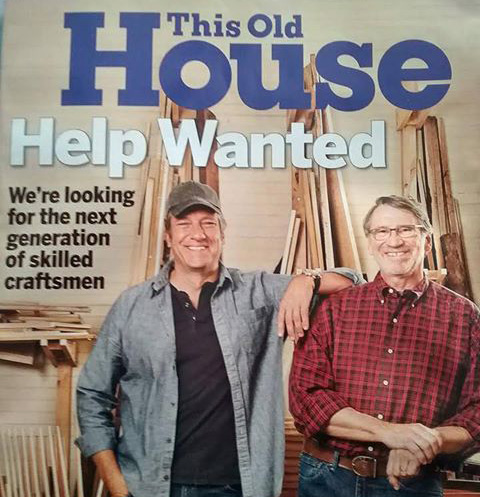 This Old House, Generation Next to Benefit mikeroweWORKS

This Old House, Generation Next to Benefit mikeroweWORKS

In 2017 mikeroweWORKS is going to give away a lot of work ethic scholarships. We’re not sure how many yet, but so far they have raised over $500,000, and they think that there is a lot more on the horizon. Along with the generosity of the people on their page, their partnership with This Old House is turning out to be rather remarkable.

This Old House, a diabolically simple TV show that’s been on the air for nearly a hundred years, has determined – quite rightly, that America’s skills gap poses a clear and present danger to anyone addicted to solid foundations, straight walls, sturdy roofs, affordable electricity, smooth roads, and indoor plumbing.

To help close the gap, Norm Abram and the crew of This Old House have launched an initiative called Generation Next – a targeted effort to encourage more kids to explore careers in the construction trades.

As a part of Generation Next, This Old House wanted to offer a scholarship program, funded in part by sponsors of their show. But then, they stumbled across mikeroweWORKS, and realized that they’ve been doing the very same thing since 2008. So, rather than do the same exact thing, the they decided to let mikeroweWORKS handle it.

Additionally, the actual house featured on this season of This Old House will be auctioned off at the end of the year, and mikeroweWORKS will receive those funds as well.

So – Mark your calendars. Sometime in March, there will be an announcing existence of another large pile of money, specifically for those willing to learn a skill that’s actually in demand.